I had thought that my other half regarded my sewing with benevolent disinterest since every time I waft my latest achievement under his nose I’m greeted with a glazed smile and a ‘that’s nice.’  Turns out he thinks my patchwork passion is neat, and can he have a quilt in the shape of the American flag for his birthday, please?  He’s renovating an old Chevrolet Pickup truck and wants to drape the quilt across the seats when it’s done.  What can I say, of course, but yes?

So, when we went to the quilting show at Uttoxeter, I was on the lookout for deep reds and warm white fabrics, but most of all I was interested in a way of representing all those stars on the blue part of the flag.  I did buy some blue fabric with white printed stars, but now I’ve had chance to look at it properly I don’t think it will fit the bill as the stars are too large.  I’ll have to surf the web to see if I can’t find an alternative.  Either applique stars or a printed fabric might do.

In the meantime, I’ve decided on a series of half square triangle blocks in shades of deep red and off-white for the flag stripes.   I discovered a method for making eight at one time on the Generations Quilt Patterns website which makes the work a whole lot faster,  but don’t let anyone tell you that HSTs are simple because if you want to maintain accuracy when making loads of them you still have to concentrate. I made them oversized and trimmed each one down to precise 2½” squares.  So that’s where I am at now.  I’ve sewn up the red stripes and I’m working my way through the white ones. 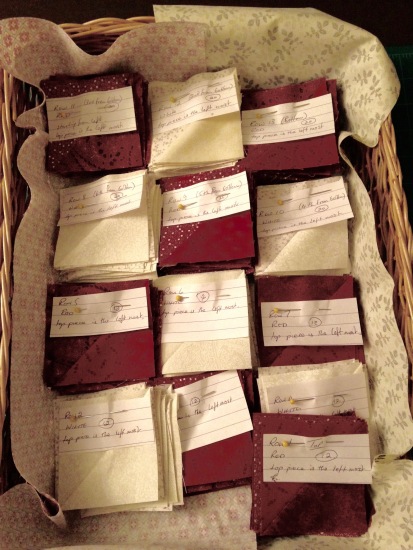 I may take a break from it soon though, because the new Westering Women BoM has been posted, and I do love a challenge….

One thought on “Stars ‘n Stripes”

Perfect Piecing is Within Your Reach

Where the Frugal Widow quilts, sews, cooks and lives

an abandoned diary of a quilter
Fiber Art by Cindy Anderson

Creating memories one thread at a time!

- Quilting in the Lone Star State

The latest news on WordPress.com and the WordPress community.